Diana Collier Kly is Co-founder and CAO of the International Human Rights Association of American Minorities (IHRAAM), an international NGO in consultative status with the United Nations.

She is also Publisher / Editorial Director of Clarity Press, Inc., an independent publisher on social justice issues founded in Atlanta in 1984, now with over 100 titles in print and over 60 foreign editions in 16 different languages, and author of The Invisible Women of Washington, a novel on women and poverty. 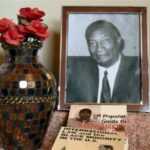 Originally serving as Communications Director of IHRAAM, she assumed the chairmanship after the passing of her husband, Dr. Y. N. Kly, in January, 2011. Dr. Kly, former Chair and IHRAAM Founder, was Professor Emeritus at the University of Regina specializing in international minority rights, and author of award-winning books on international law, minority rights and African Americans, in particular.

The above photo concerns the IHRAAM Conference, FROM CIVIL RIGHTS TO HUMAN RIGHTS AND SELF-DETERMINATION? held at East-West University in Chicago in 2012.