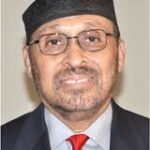 Dr. Farid I. Muhammad was born, raised and educated in Harlem, N.Y.. Dr. Muhammad’s graduate training covers the fields of clinical psychology, criminal justice, and international studies, with primary focus in higher educational administration and management and a secondary concentration in comparative and international systems of education. He earned his B.A. in psychology from Iona College in New Rochelle, N.Y; his M.A. in clinical psychology from Bradley University, Illinois; and performed his doctoral studies at the New School for Social Research, N.Y.; State University of N.Y. at Albany (SUNYA), Indiana University, Bloomington; and completed his studies at the University of Sarasota, Florida (Argosy University). Dr Muhammad, having also developed extensive grass-root experience in community organization, has served as Dean of the Ministry of Education for the Muhammad University of Islam and subsequently the Sister Clara Muhammad School systems. He has also served on the faculty of the State University of N.Y. at Albany, Rutgers University, Bradley University, City Colleges of Chicago, Governors State University and Chicago State University.

He has recently retired from East-West University (EWU) of Chicago as Professor Emeritus where he served as former Dean of the Division of Arts & Sciences and Chairman of the Department of Behavioral & Social Sciences (BHS). While serving at EWU, and for over a 15 year period, he managed multi-million TRIO and Title III grants via the U.S. Department of Education. These competitively won federal funds were aimed primarily to help assist predominantly under-represented, low-income, and first-generation students in the completion of their baccalaureate studies. He is member of numerous professional associations and serves on the Board of several domestic and international educational institutions, inclusive of the newly established American Islamic College (AIC) of Chicago. Dr. Muhammad proudly serves as a Founding Member of the IHRAAM Directorate. He was IHRAAM’s lead representative for their 41 member US and Canadian delegation to the U.N. World Conference Against Racism (UNWCAR) held in Durban, South Africa in 2001. . He has traveled extensively throughout Africa, the Middle East, Europe, Canada and the Caribbean. His daughter, who recently completed her doctorate in clinical psychology, is a proud graduate of a HBCU.

He is presently Director of the Core Planning Group for an Office of HBCU Development and International Cooperation.

The above picture, taken at UN Headquarters, captures the signing of a historic MoU with UNDP Regional Bureau for Africa on September 23, 2019.