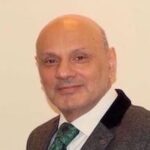 A. Majid Tramboo, Executive Director of International Council for Human Rights Kashmir Centre, was confirmed by the ICHR’s Board of Directors in April 2003 , following their unanimous decision to open the Kashmir Centre in Brussels. Keenly aware of the long and bitter suffering of the people of Kashmir, Barrister Tramboo ensured that this project moved from conception to realization with remarkable speed. Within six months, Barrister Tramboo hosted the official ceremonies to open the ICHR Kashmir Centre before an audience of MEPs, MPs and Embassy representatives from various countries, European Commission and Council personnel, international scholars, NGOs, and media as well as other distinguished guests.

Barrister, Majid Tramboo divides his time between Brussels and London, where in 1999, he founded and continues to head the law firm of Tramboo & Company , practising exclusively in immigration, asylum, nationality and human rights matters. His distinguished legal career began in 1983 at the Jammu and Kashmir High Court where he practised in conducting civil and criminal litigation. In 1988, he served as in-house Counsel for conducting civil litigation and immigration, asylum and nationality matters, which included appearing before adjudicators and the Immigration Appeal Tribunal for Khambati & Sohal , Solicitors in London.

In 1990 he accepted a position with the United Kingdom Immigration Advisory Service (UKIAS), London, as a Tribunal Counsellor, where he reviewed cases dismissed by adjudicators, settled grounds for leave to appeal and represented appeals before the Immigration Appeal Tribunal. As the Head of Legal Services for Immigration Advisory Service (IAS), London, in 1994. he provided training to the legal staff, this included preparing training manuals and up-to-date, in-house law reports (including commentaries on new rules, regulations and case law). Additionally, he assessed the competence of the legal staff, in terms of the preparation and presentation of cases, which involved intricate points of law before the Immigration Appeal Tribunal, adjudicators and special adjudicators.

The focus of Barrister Tramboo’s legal research is on the British Nationality. Immigration and Asylum Law and The Human Rights Act 1998. the International Law and the International Human Rights Law. He developed his administrative, supervisor, and management expertise through his experience at several different law firms and while at the Immigration Advisory Service.

In addition to his legal practice and as a Director of IHRAAM. Majid Trambo organized International Conferences and Seminars:

He is a Member of the: